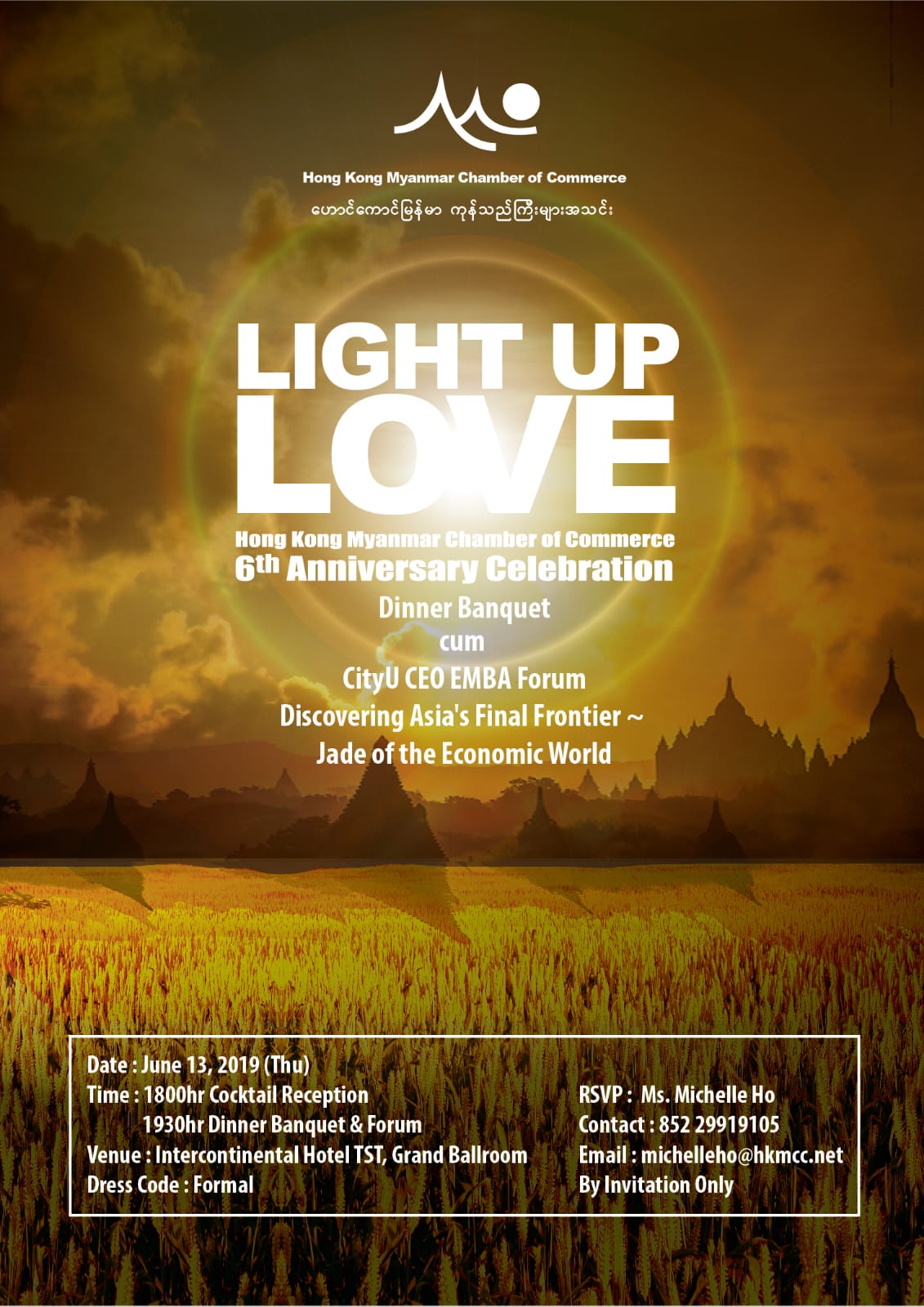 Meeting with Ministry of Labour, Immigration and Population

Letter of Intent Signing in Yangon

MoU Signing Ceremony Between HKMCC and Myanmar Tourism Federation
Aug 5, 2017
Meeting with Consul-General H.E. U Wunna Han, Consulate General of the Republic of the Union of Myanmar in Hong Kong

Discovery Hong Kong and Marvel of Myanmar by UMFCCI

Taking off with Myanmar

This five-day Study Trip visit to Myanmar was jointly organized by jointly organised by College of Business at City University, Hong Kong Myanmar Chamber of Commerce and World Green Organisation which consists of more than 20 senior executives, professors and supporting staff from the City University of Hong Kong.

This is the introduction trip for Prof. Brian To, the representative of Mount Sinai Hospital Group with different stakeholders in Myanmar.

HKMCC has proudly participated as a Business Engagement Partner at the Ceremony.

Myanmar SME Link is a business opportunity platform that connects Myanmar's SMEs and entrepreneurs with golobal business, capital and services.

Research on "The Role of Myanmar in One Belt, One Road"

Meeting with the Ambassador

Mr. Albert Oung visited the Ambassador Extraordinary and Plenipotentiary of the People's Republic of China to the Republic of the Union of Myanmar H.E. Mr. Hong Liang.

This event was a charity event for Myanmar flood victims.

The delegates have visited the Yangon City Development Committee, Yangon Heritage Trust to learn how to promote and help the heritage conservation and sustainable develpment of Yangon.

With crititcal elections less than half a year away, policy makers and industry leaders gathered to discuss and debate the key issues facing in Myanmar.

To reflect on progress made, to call for change and to celebrate acts of courage and determination by ordinary women who have played an extraordinary role in the history of their countries and communities.

Mr. Albert Oung, the founding Chairman was one of the speakers and shared about "The Green, The New Mindset" at the forum.

Mr. Albert Oung, was one of the speakers and sharing about Green Economic Opportunities in Myanmar.

This Pavilion was the first Myanmar pavilion ever held in Hong Kong Convention and Exhibition Center to promote the business ties between Hong Kong and Myanmar.

It's missions is to strengthen the ties among the Hong Kong SMEs in Textile and Garment Industry, to provide a platform for exchanges of idea and opinions within the trade, and to reflect the needs of the industry to the HKSAR government.

Meeting with U Aung Naing Oo, the Director General of the Directorate of Investment and Company Administration (DICA) under the Ministry of National Planning and Economic Development was remarkable.

The inaugural event will create a platform in Hong Kong where up to 400 entrepreneurs from around the world will meet. They will be accompanied on a journey of discovery by experts and opinion leaders from the worlds of academia, government and business.

Delegation led by the Chairman of Myanmar Overseas Employment Agencies to Hong Kong received by the Hong Kong Myanmar Chamber of Commerce.

The Myanmar Agribusiness Investment Summit 2014 is designed to provide a platform for the international agribusiness industry players and potential investors to gather in Yangon.

66th Anniversary of Myanmar Independent Day Celebration Cocktail Reception, proudly organised by Consulate General of Republic of the Union of Myanmar and full sponsor by HKMCC.

"Shared Responsibility for Anti-Trafficking In Persons"

Seminar On Myanmar In Reform

Seminar on Myanmar In Reform